On September 30, 2015, exactly 100 years after welcoming its first class of students, UBC launched a year of Centennial celebrations. The year 2015 also marks a historical time for psychology at the university; it’s the 100th anniversary of when the first psychology class was offered. Now psychology is the most popular undergraduate major at UBC, with over 1800 students working toward their BA degree and over 150 studying for their BSc degree. Take a look back on how student life has changed over 100 years in this infographic.

The largest department in the Faculty of Arts, UBC Psychology ranks among the top programs for psychology in Canada and the world according to the 2015 QS World University Rankings, jumping ahead six spots in the past year. 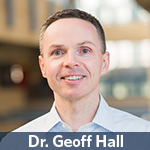 “Our future builds on our past,” says Dr. Geoff Hall, Professor and Head, Department of Psychology. “We’ve grown from a department of humble beginnings into one that is conducting cutting-edge research across the spectrum of psychology. Our research has local and global impact and we continue to engage in interdisciplinary collaborations, both at UBC and beyond. At the same time, we continue to provide a rich learning experience for our undergraduate and graduate students. 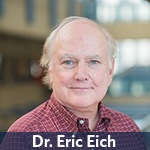 UBC Psychology Professor Eric Eich, former department head and co-editor of the book UBC Psychology at 50, can speak to the rich history and contributions of the department. “The groundwork, resolve, and dedication of the members of our department have made it what it is today, one the leading psychology departments in Canada and in the world,” says Dr. Eich. “By emphasizing excellence and encouraging collegiality, we are a department that that continues to thrive on account of its people – our talented students, faculty and staff.”

There have been many historic moments over the past 100 years for the Department of Psychology at UBC. Explore the timeline below to see photos and a glimpse into our past. (Source: UBC Psychology at 50)

The first psychology course at UBC is offered in 1915 by the Department of Philosophy. It is a single-semester course titled ‘Philosophy 1A: Elementary Psychology’. 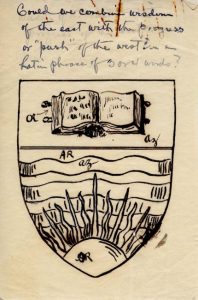 Original design of the UBC crest

UBC adopts its coat of arms, based on design ideas provided by UBC’s first president Frank F. Wesbrook. The UBC crest depicts ocean waves below a setting sun, and the motto Tuum Est, meaning “It Is Yours.” 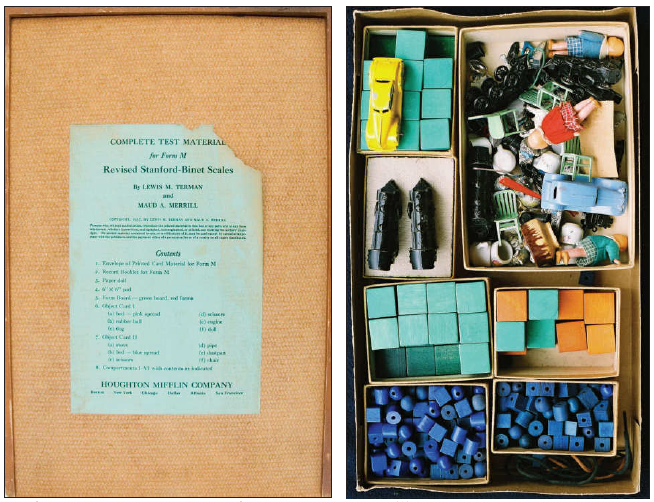 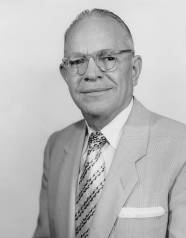 Joseph Morsh, a doctorate in experimental psychology from John Hopkins University, joins the Department of Philosophy as a psychology lecturer. Extremely popular, Morsh routinely attracts large numbers of students to his classes. 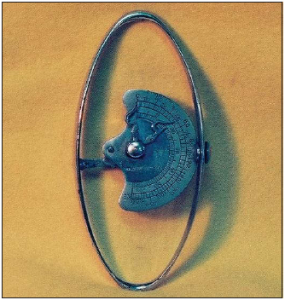 A hand dynamometer, used to measure grip strength circa 1930s

The newly created Department of Philosophy and Psychology awards its first MA degree in psychology to Jean Archibald for her thesis ‘Some behaviour problems and their treatment’.

The Department Head, Dr. James Irving, develops and introduces a new course on Cultural Psychology; the only course in Canada and one of the first in the western world. Cancelled a year later, it is reintroduced 55 years later when the Department of Psychology emerges as a world leader in the field of cultural cognition.

Sperrin Chant, a former group captain in the Royal Canadian Air Force, replaces James Irving as Head of the Department of Philosophy and Psychology. Similar to the university, the department enters a period of rapid growth.

Professor Chant persuades the university to make available a number of temporary huts to be used for administrative, teaching and research purposes. This acquisition marks the first move towards department centralization. 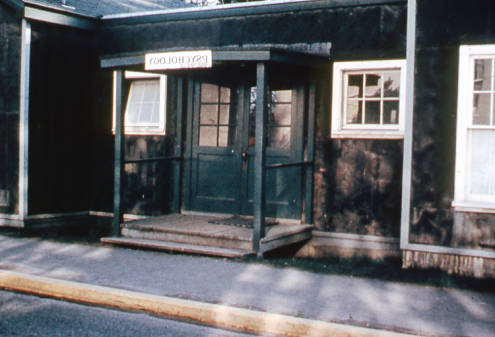 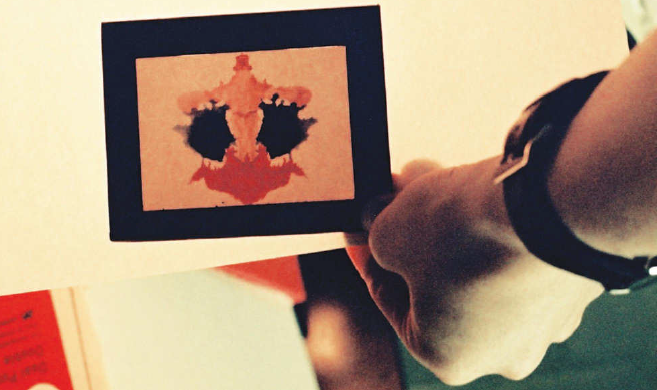 A Harrower Lantern slide of a Rorschach inkblot (circa 1940s)

The temporary psychology huts catch fire and burn to the ground. The University of Toronto’s psychology department donates equipment to help the department resume its research and training mission. 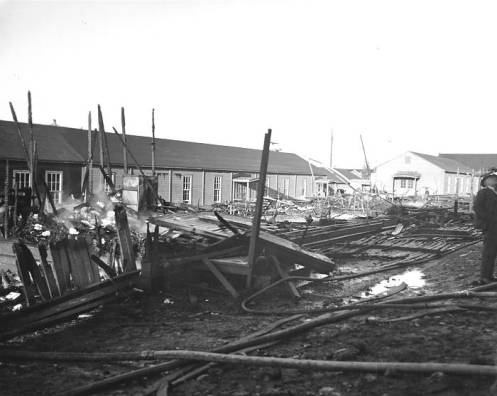 Psychology Huts after the fire

UBC Psychology alumnus Albert Bandura, who is considered one of the most influential psychologists of all time, graduates with a BA in psychology from UBC, winning the Bolocan Award in psychology. 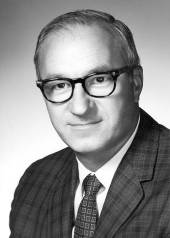 The Department of Philosophy and Psychology is authorized to grant a PhD in clinical psychology, although the first degree was not awarded until 1968. 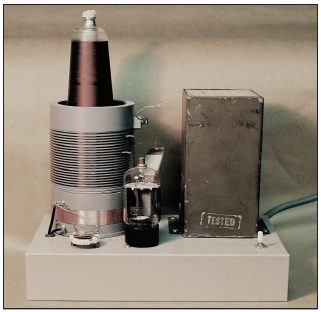 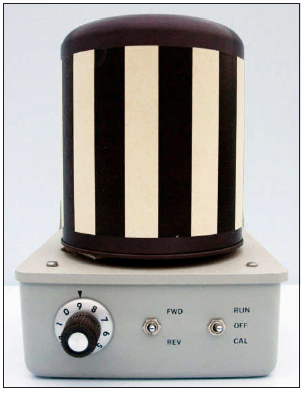 Nystagmus drum used to induce rhythmic, oscillating movements of the eye (circa 1950s) 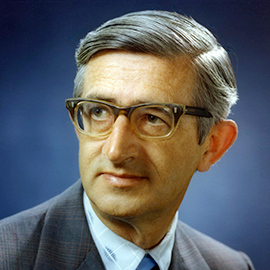 Dr. Douglas T. Kenny is appointed Head of the Department of Psychology. Dr. Kenny works to strengthen the department’s research standing by recruiting scientists, attracting funding and revamping the graduate program at a doctoral level.

The department locates into the Henry Angus Building, representing a considerable increase in teaching, research and administrative space. The department enters a period of rapid expansion.

Dr. John Huberman becomes the first candidate to successfully meet the requirements for a PhD in clinical psychology. 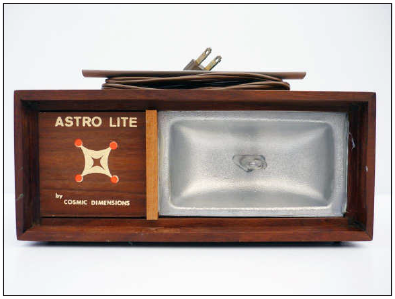 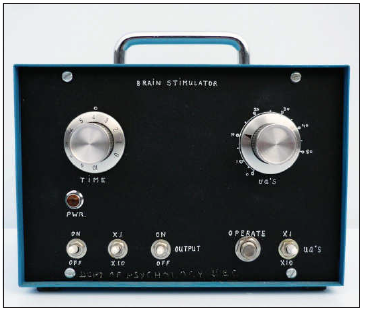 The new Biopsychology Annex opens to provide space for animal and physiological laboratories. 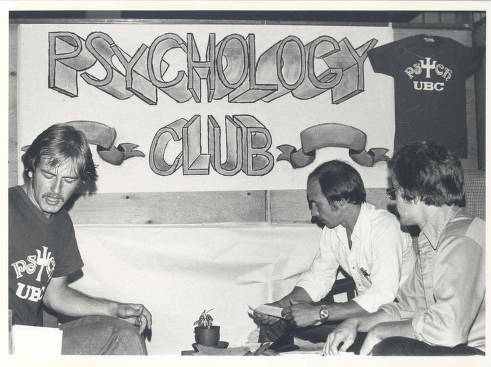 Dr. Peter Suedfeld is appointed Professor and Head of the Department of Psychology. Dr. Suedfeld remains Head until 1984. 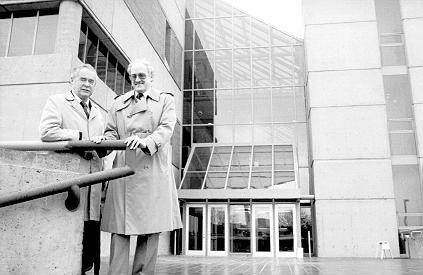 At the May 1974 commencement ceremony, more BAs are awarded in psychology than in any other academic unit in the Faculty of Arts.

The Psychology Annex opens as the new home of the developmental and social areas. 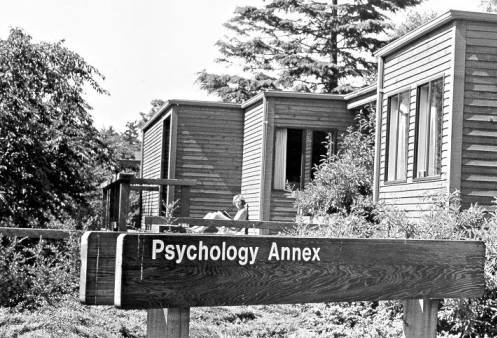 The BSc in Psychology is introduced. 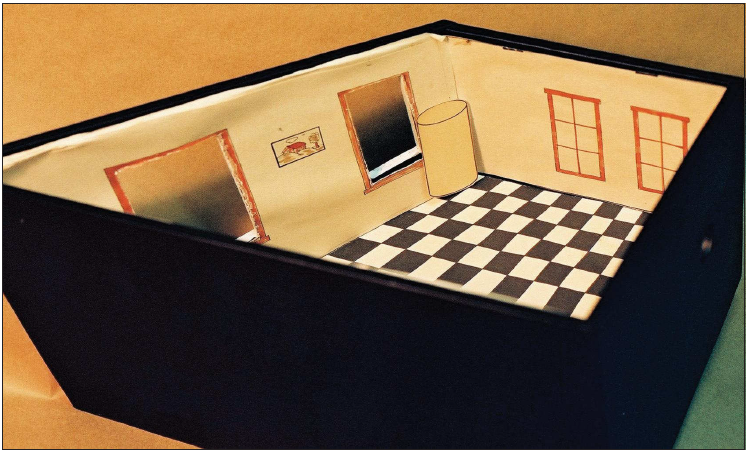 Model of the Trapezoidal Room Illusion, built for Professor Stanley Coren to represent a miniature version of a full-scale room (1977)

UBC Senate approves a budget of $8,960,000 for a new, stand-alone building for the Department of Psychology.

Construction of the Kenny Building 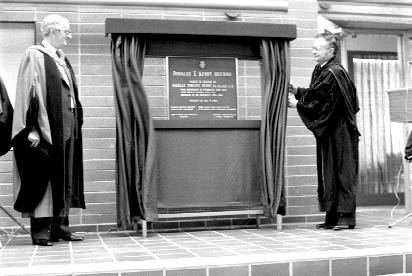 On February 27, after years of planning, Psychology faculty, staff, and students move into the newly constructed Douglas T. Kenny Building.

On July 1, Dr. Richard Tees begins his tenure as Head of the Department of Psychology.

In the Review of the Faculty of Arts, psychology is cited as ‘special strengths’, ‘first-class’, and ‘represented by internationally competitive scholars’. Similar statements are made the following year in an external review of UBC Psychology. Dr. Richard Tees assumes another term as Head of Psychology.

An External Review Committee concludes that UBC Psychology is a highly successful science department in the Faculty of Arts. Its strongest recommendation is that the university ‘do everything possible to retain Psychology faculty and to provide clear and tangible support for their research programs’.

The department begins to reinvent itself with seven new faculty recruits, and sees growth in graduate student fellowships and scholarships. 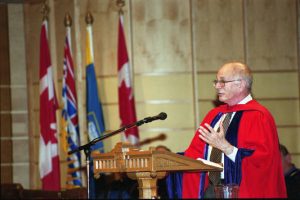 The department’s commitment to engaging undergraduates in research is evident by the $560,000 in research grants that the faculty spends to support the 140 students in Undergraduate Research Assistant positions.

In a Times Higher Education Supplement, UBC ranks 33rd in the world and UBC’s social sciences departments, including psychology, rank 14th in the world.

UBC Psychology celebrates the 50th anniversary that the department became an autonomous unit. To mark the occasion, Dr. Eric Eich, along with Andrew Witt and Joanne Elliot, edit and publish the book ‘UBC Psychology at 50’.

Dr. Eich is appointed the Editor-in-Chief of Psychological Science and embarks on ground-breaking scientific publishing reforms.

The Department of Psychology receives a $2-million investment from the British Columbia Lottery Corporation and the Government of B.C. to establish a new Centre for Gambling Research at UBC.

The department continues to see rapid growth and undergoes serious modernizations of the Kenny Building and it expands into two new locations, CIRS and the Audain Centre.

The Centre for Gambling Research at UBC officially opens.

The Department of Psychology ranks second for psychology in the world according to the 2015 QS World University Rankings.

This story would not be possible without the historical contributions of Dr. Eric Eich in the book he created and co-edited, UBC Psychology at 50. In addition, we thank UBC Communications and Marketing, UBC Centennial Office and UBC Library Digital Collections for the images and assets used in this article.